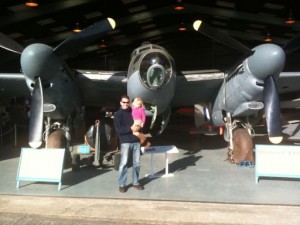 I’m always looking for inexpensive family days out (in Herts or North London Area), not that we can’t afford it but I object to paying and arm and a leg to spend quality time with my daughter. @annieqpr one of my twitter mates recommended the RAF Museum in Hendon.

Earlier this week my daughter asked to go to an airport and I duped her by taking her to the local outlet centre which looks like an airport.  I think you’ll agree from the photo.  She had a great time running around but I don’t think the ride-on airplane fooled her. So I thought it was only fair to make more of an effort!

We had a great morning at the museum and it was all free, including the parking!  I’m not a plane enthusiast but my husband is a real anorak.  His father serviced planes during the war, which I attribute to this fascination. I’ve also been told that it’s a bloke thing.  I learned the date they painted black and white stripes on the bottom of planes, the equivalents to German planes and the process of recovery planes from lakes in Europe.

I really didn’t mind though because Madame absolutely loved it.  She just ran around shouting plane, plane, plane!  There’s also an interactive section for kids…she’s a bit young to get a lot out of it, but she did get to press buttons and things happened.  Plus, her daddy got to make a fool of himself on a glider and sat in a tiny helicopter (Roberts R22).

We ate in the Wings restaurant, which I wouldn’t recommend, but you could take your own food as there is an area for those who do.

All in all, a great day out!