Now that we’re into September, I can’t believe it, it must be time to get those slow cookers out and dust them off.  Feel free to share some of your favourite recipes.

I said tentacles not….

I was a vegetarian for over 20 years but now happily eat meat in moderation.  However, there are still some things that I can’t do.  I could never select a calf for slaughter later in life, cut the head off a fish, deboning chicken makes me squeal and the mere thought of tripe makes me want to gag.

So, when I was sent squid from the lovely people at Fish is the Dish as part of their campaign to get people eating more fish, which was totally my choice as I’d never cooked it and was keen to try, I was a bit unsure of what to do with it and the thought of the tentacles made me squirm a bit.

Here is the moment, I had to touch it for the first time……yes, I squealed like school girl!

Most people would probably chop it up, bread it, deep fried it and served it with chips, but I was determined to try something in the slow cooker.  I was a bit worried, as it’s a delicate meat that it would turn rubbery in the slow cooker.  In the end, I opted for Sara Lewis’ Squid in Puttanesca Sauce served on Linguini accompanied by Caesar Salad and Garlic bread.  I would have posted the entire recipe but that would have been blatant plagiarism. 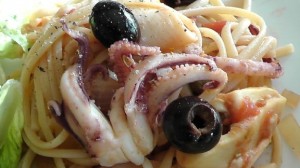 I can assure you it wasn’t rubbery, this may be due to the fact it’s cooked on low for a shorter period of time and the tentacles aren’t added till 30 minutes before the end of cooking.

Hubby loved it and had 3 helpings, I’d definitely have it again, but sadly our daughter was a bit scared of it but this may have to do with me chasing her around the kitchen with it earlier.

Do check out the recipes below, like a few and add your own.

Disclosure: The Squid was courtesy of Wing of St Mawes