What a giggle!  When we were at Blog Camp a few weeks ago we noticed that there is an unusual number of bloggers local to St. Albans.  So, on our return we set up a Facebook group and vowed to get together more regularly.  Once we hashed out diaries; with or without kids, evening or during the day we decided to have a simple night out of drinks and dinner.

But in the end, we were invited in by the lovely Juliet from Beautylase in St Albans, to promote their mummy and baby treatments on a Monday before we went to dinner.  They have a treatment room on the ground floor, which has enough room for a pram and they allocate extra time for the treatments in case you have to tend to baby at no extra charges.  I’ve been going to Beautylase for years and can highly recommend it and even though it looks posh the prices are very reasonable (Eyebrows threading from £12).

So the nine of us set upon them at 6.45, the store was kept open late just for us.  We were asked to arrive without any make-up of nail polish, eeek!   We were greeted with champagne and then the madness started.  We were all whisked around for our treatments.  I was truly impressed that in an hour they managed to do our eye-brows, nails, spray-tans and make-up.  They also brought in a Sarah, a mobile hair stylist so Mirka and I managed to wangle our hair done. 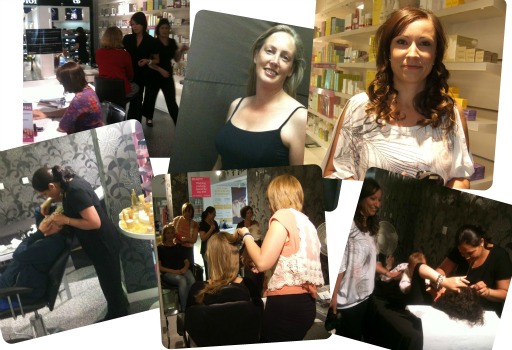 We all looked gorgeous and were ready to hit the town!  I must admit that I didn’t look so gorgeous when I staggered through the door at 1am but it was a great night.  Thanks to all my fellow bloggers and to the team at Beautylase!  As mums we don’t often get the chance to spoil ourselves so this was truly a great treat!

I can’t wait till the next time we get together!

As it was my birthday last week I thought I’d treat myself to a bit of pampering.  Before I had Madame I used to take better care of myself, with monthly trips to the salon, but now I’m lucky if I get to the hair-dressers twice a year!

So, I started with a bit of threading, an Indian technique for brow taming.  I’d really recommend it.  It’s like having a mini-facelift without the cost or scalpel.

I also splurged on a bikini wax as well, but for obvious reasons I didn’t take any photos or video.  Maybe I should have taken some audio!  You should have heard the woman yelping in the next room!

Then in an attempt to rescue my aging hands, you’d think I was 80, I had a manicure. 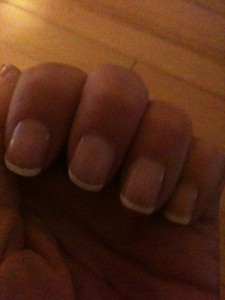 And to finish the look I had my hair done. 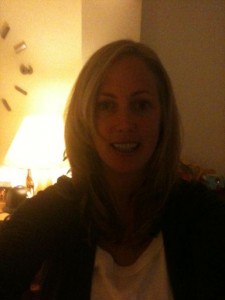 I may not look like a million dollars but I do feel like it!  Well, at least I feel £198 lighter!!!  Another reason why I only go twice a year.

Prior to having my daughter I used to take quite good care of myself.  Every couple of months I’d treat myself to mini manicure, pedicure, eyebrow threading, bikini wax and visits to the hairdresser weren’t yearly. My husband really doesn’t take a blind bit of notice so I really don’t bother anymore. Plus, it saves us a few pounds.  I do, however, still have my eyebrows and nails done occasionally.

And this is when it happened….

I was having my eyebrows done and when the lady was finished.  She said in her broken English…

I was stunned into silence, panic set in; my head was racing….WTF? OMG! I have a femtash!

I really don’t remember what I said, but I think I politely said ‘no thank you’ and then high-tailed it out of there without leaving a tip!  I spent the rest of the day checking my upper lip in every reflective surface and in every different light.  Paranoia consumed me, but I couldn’t see anything.  I even tried tugging on the culprit but couldn’t.  When hubby returned home I had him check as well, according to him there was nothing, but could I trust him to answer honestly?

Luckily, a couple of weeks later at the pub, I was having a beer fuelled conversation with a few of the girls and low and behold I’m not the only one who has had the same experience at the same salon.  I guess its routine practice.  However, I still think it’s rude and have emailed the salon!