Where is the best place to buy school uniforms?

I’m so glad I listened or my daughter wouldn’t have had any uniforms to start school as most places would have sold out.  We had some left over M&S vouchers so kitted her out with winter uniforms.  They may have been a bit more expensive but they did last the entire school year.

However, during the year we have managed to accrue quite a few summer uniforms, some were hand-me downs and others were sent for review purposes.  We have uniforms from Aldi, Asda and BHS.  When I asked my 5-year old which ones were her favourite, the Girl’s Classic Gingham Dress (£4) from BHS have come out on top! 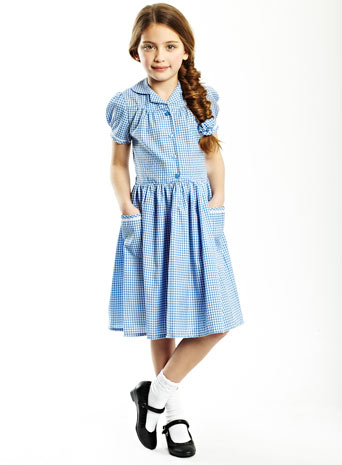 She loves the ones with the two pockets, the bow at the back and hair tie.  As a mum, I love the fact that they are knee length as I find a lot of the summer uniforms are far too short.  They’ve also stood up to numerous washing and if I hang them up straight away there is no need to iron them.  However, I do find the buttons a little fiddly and would prefer the zipper from the Asda one, however that one is a bit short for my liking.

This year there seems to be a price war between the big supermarkets with some offering uniforms for as little as £4.  I’m a little dubious about the ethics behind some of them as I don’t know how they can ethically source them for that price.  There is an interesting article ‘Why I would NEVER buy into cut-price supermarket school uniform deals on Parent Dish.

This year I’m hoping to get away with using her summer uniforms for September and buying winter ones later.  I do hope this isn’t a bad idea.  Do let me know otherwise.