Outdoor Activities for Kids near Farnham 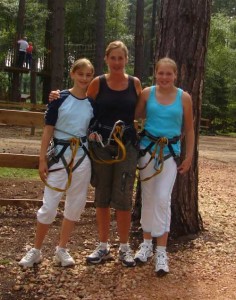 When my niece was over from Canada about 8 years ago, when she was 12, I took her to Go Ape in SherwoodPines near Nottingham and we had a brilliant time.  It’s always something I wanted to do with my daughter but always assumed she would be too young.  I had no idea that Go Ape had a Junior Tree Top Adventures for slightly younger children at a few of their locations.

On the weekend we went to Alice Holt Forest near Farnham, it’s only about an hour from St Albans, Herts.  We also took one of her friends from school.  They both had an absolute blast.  It was absolutely chucking it down but it really didn’t affect their enjoyment, just make sure that you take some wet weather gear and a change of clothes.  Gloves are also a must but you can buy them there if you forget to bring some.

The Junior Tree Top version is slightly lower than the original Go Ape experience, but the thing I like about it is that they are attached to the safety rope the entire way around, from the time they go up the stairs until the time they come back down via the zip line, unlike the older version where they have to unclip and clip themselves at different points. 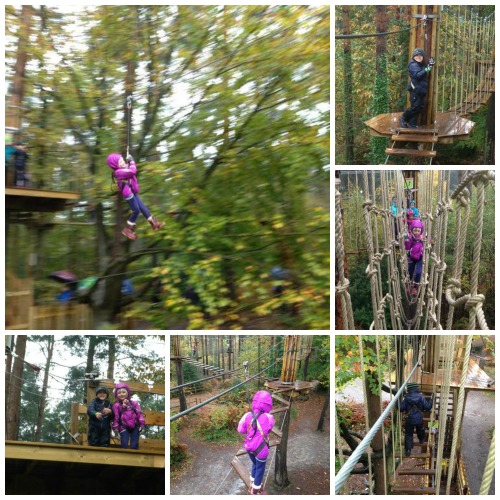 Children as young as 6 years of age can do the course on their own if they are a meter tall and have a head for heights.  However, even though the kids we took were both six – I would still encourage an adult to go with them.  My daughter almost bottled it at one point but luckily as her dad was with her he managed to calm her down and persuade her to carry on.  He did the course with them a couple of times then they were both confident enough to do it on their own and if I’m honest I think he enjoyed it as much as they did.

What about younger children?

Children younger than 6 years of age can do it as long as they are a meter tall but must be accompanied by an adult.

The woods surrounding the site in Alice Holt Forest are gorgeous and would be a perfect setting for a day trip and a picnic.  There’s also a cafe in the forest.    However, as I mentioned the weather wasn’t brilliant but we found an amazing pub about 3 miles down the road in Farnham called The Bat and Ball, the road is rather dubious getting to it but once you are there it has lovely open fires, enclosed garden with play equipment and the most amazing desserts.

We are already planning another trip to Go Ape with some of the mums from school.

Disclosure:  The experience was courtesy of Go Ape for review purposes.