Theatre for Kids in London – Easter 2014

We popped into London yesterday to see Rubbish – a playful look at junk in the Purcell Room of the Southbank Centre by Theatre Rites.  We took the train direct from St Albans to London Blackfriars and strolled along the Southbank in the sun.  It’s only a short 5-10 minute walk and avoids using the underground. 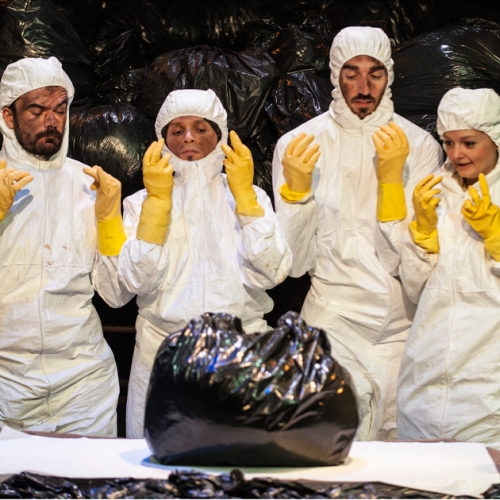 I have to admit for the first 10 minutes I was wondering what I had agreed to as the characters each came onto the stage, without narration to plinky plonk type of music as they explored a mountain of rubbish.  I was worried that it was going to be some arty farty presentation from Eco Warriors, but boy was I wrong.  It was just a gentle way to introduce the characters, their friendship, set the stage with only a light environmental message.

One of the UK’s most celebrated theatre companies for children imagines a world that celebrates its rubbish; where at the touch of a puppeteer’s hand, the contents of a bin bag can come alive before your eyes.

It’s really hard to describe, but it’s all about the 4 friends who are excavators and take turns going through the different bags of rubbish and you’d be amazed what they found and brought to life.  This is when the puppetry started at times all of them would be involved with bringing the garbage to life.

One of my daughters favourites was the tin puppy dog who wasn’t very good at playing fetch.  My favourite was the lost glove looking for its pair.  They magically recreate the skyline of London with rubbish and then cleverly make it look like he is walking down the street.  You’d have to see it to fully appreciate how clever it was.

Disclosure:  Tickets were complimentary for purposes of this review.