Things to do in London with Kids during Easter

Apparently it doesn’t matter if you’re 6 or 65 years old, men in bulging tights are hilarious!

I took my mother who is visiting from Canada and daughter to see Coppélia by the English National Ballet on Monday night at the Peacock Theatre  in London and the two of them spent the first act giggling.  I have to admit I was slightly distracted as well.  Once we got passed being juvenile we thoroughly enjoyed it.

‘My First Ballet series brings young audiences their first taste of ballet through the magic of fairy tales, captivating music and beautiful dance’

For the last 3 years the 2nd Year Students from the English National Ballet have been putting on performances based on traditional fairy tales to foster a love of the ballet from an early age.  We’ve been to see Cinderella and Sleeping Beauty.

Coppélia was not one that I was familiar with and when I first started researching the story and it mentioned an eccentric toymaker who wanted nothing more to bring his doll to life,  I initially thought it was going to be Pinocchio but that is where any similarities end.

A Case of Mistaken Identity 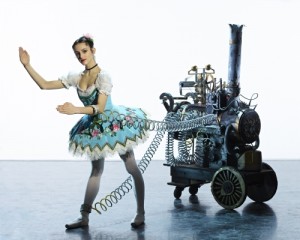 Franz and Swanilda are set to be married, but Swanilda catches Franz flirting with Coppélia, Dr Coppélius life-size doll and in a rage calls off the wedding.

The bride to be and her friends sneak into the Toymakers house to discover that she is simply a mechanical doll and cruelly fool the doctor into thinking his doll has finally come to life…..

The My First Ballet series is an excellent way to introduce both young and old to the ballet.  It will be playing at the Peacock Theatre from the 8th – 19th of April. 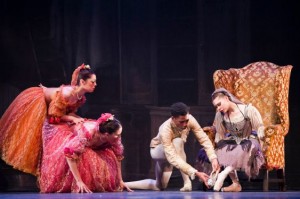 I don’t think my daughter realises how lucky she is. She’s only 4.5 and she’s already been to her first ballet. I’m 40 and it was my first ballet!

We went to see ‘My First Sleeping Beauty’ which was put on by the English National Ballet at the Peacock Theatre in London. It was specifically designed for children to foster a love of ballet from an early age.  It was short and sweet with two 40 minute halves with an interval in the middle. They also incorporated narration, which probably helped the little ones follow it. Plus, it being a favourite fairytale they already knew the story.

The theatre was a sea of pink; little girls in their favourite princess attire. We managed to get by the merchandise fairly unscathed, I was only fleeced £3 for a hideous pink, fluffy, flashing wand.

My daughter and her pal were absolutely mesmerized. I’ve never seen them sit so still and so well behaved for so long. When it was time for the interval, my daughter refused to leave the theatre as she didn’t want it to end. However, with a bit of persuasion I manage to get to the bar for a glass of red!

During the second half, towards the end, they got up went down to the stage and joined in with their own style of ballet.  It was absolutely precious.

Disclosure: Our family ticket was courtesy of the English National Ballet.