I really should pay more attention.  I put far too much trust in Film/TV Producers and recently Lovefilm, to know what is appropriate for my daughter to watch.  I’m guilty of putting the TV on and if it’s on Cbeebies, Boomerang or Nickelodeon I don’t even give it a second thought, trusting that what she is watching is appropriate.

So what’s the problem?

I have a subscription to Lovefilm, so our 5 year old can watch movies on demand.  She tends to watch movies in the morning with breakfast.   Armed with a bowl of cereal she grabs the iPad, loads up Lovefilm and navigates to the ‘Children’s ‘ films.   She’s watched the likes of Mary Poppins, Enchanted and Scooby Doo plus a few others.  All pretty harmless in my view.

However, this morning, do bear in mind she also tends to wear earphones so I couldn’t hear what she was watching, I was walking past and glanced at the screen and the word ‘rape’ jumped out at me in the subtitles.  I quickly grabbed it off her to find out what she was watching.  It was a movie called ‘Mulan’ which is rated 15, previously I hadn’t realised that within the ‘Children’s’ collection there are also movies that are rated 12, 15 and 18; which makes perfect sense as 12-18 are kids but what’s appropriate for them is worlds apart from what appropriate for a 5 year old.

I’ve now found the parental settings and have turned them on.  However, according to some the Parental controls on Lovefilm and Netflix aren’t what they should be.   She can now only watch movies rated U freely but if she tries to watch something PG (e.g Matilda, Karate Kid, Parent Trap) or higher she will have to ask me to enter a password.  Phew!  One less thing to worry about.

To set the parental controls: 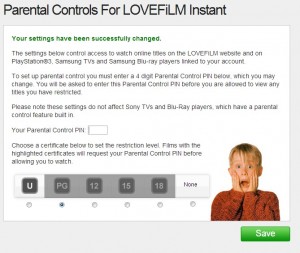 Is there anything else I should be watching out for? 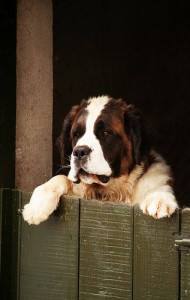