I’m absolutely gutted, that I lost my umbrella the other night.  I managed to get into London and had it with me until the last 5 minutes.  I’m guessing I left it on the train when I got off at my stop, we may have been slightly distracted eating Kebabs and making paper hats. 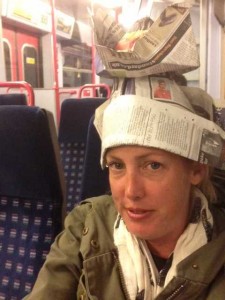 I was travelling from London to St Albans on First Capital Connect.  I’ve filled in a lost property form but guessing there is very little chance that I will ever get it back. :-(

I could just rock up to lost property and claim any old umbrella as I imagine they have thousands of them.  However, this wasn’t just any old umbrella!  It was a Wine Bottle Umbrella from Katwalk Kimberly’s, pure genius! 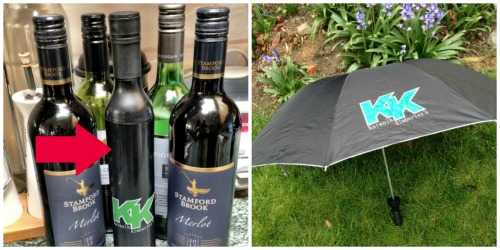 My fear is that someone has either kept it for themselves or they would not have realised it was an umbrella and it’s on its way to a bottle recycling depot somewhere!

Has anyone seen my umbrella?  If you find it there’s a bottle of wine in it for you!

I was in a soft play centre last week, for my sins, sitting in the corner as I usually do playing on my phone, ear wigging and tutting at the other mum’s sharing stories about the colour of their children’s faeces, when a little girl came rushing up to her mum screaming with a split lip.  The mother calmly picked her up, opened a sachet of sugar and started to sprinkle it on her lip.  I really thought she was nuts!

But, me being me, an inquisitive soul, I came home and did a bit of googling.  Please don’t quote me as my research wasn’t very scientific but apparently there’s something behind it.  It seems that it can help wounds heal faster and reduce pain.

The treatment originally came from Africa, where they didn’t have access to conventional medicine so they used whatever was available.  On my Google travels, I came across an interesting study by

‘Senior Lecturer Moses Murandu grew up in Zimbabwe and his father used granulated sugar to heal wounds and reduce pain when he was a child. But when he moved to the UK, he realised that sugar was not used for this purpose here…….

Sugar can be used on wounds such as bed sores, leg ulcers and even amputations. It works because bacteria needs water to grow, so applying sugar to a wound draws the water away and starves the bacteria of water. This prevents the bacteria from multiplying and they die. Moses found that a 25% sugar concentration ensures the microorganisms cannot survive.’

Apparently, if it’s adopted by the NHS it could save billions of pounds!  But you and I know the pharmaceutical companies aren’t going to let this happen. I do think it’s unfortunate that some of the traditional medicines are overlooked in favour of their much more expensive counterparts.

So, I’m off to Starbuck’s for a large latte and to nick a bunch of sugar sachet’s for the next time Madame does a face plant.

Have you heard of this?

Is it a wives’ tale?

This is my first post. For more info about me you can check out my ‘About’ page.

There are a couple of reasons that I’ve decided to start blogging. The first is professional, I’m an ICT Consultant and Trainer and with the introduction of Web 2.0 (Social Networking, Wikis and Podcasting) into the UK curriculum, I need to get on top of this, and the best way to do this is for me ‘have a go’.

Embarrassingly, up to about two weeks ago, I’d never heard of it. Since I had my daughter, about 18 months ago, I’ve been in a bit of an ICT rut.  Only just, following the masses, I decided to join Twitter and kept hearing references to Web 2.0.  So, off to Google I went to find out what it was all about and what I found was very exciting.  I’m now out of my rut and all fired up.

While on Twitter, I also stumbled across a huge network of ‘Mummy Bloggers’, according to www.mychild.co.uk, there are 36 million of us World Wide. I’m really enjoying reading their tweets and Blogs.  I’m learning and laughing a lot.   It’s great to see we’re not all perfect!

I’m planning to keep this Blog to share my experiences and mishaps of motherhood.