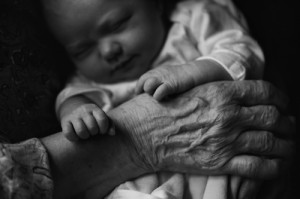 Parts of this may horrify some of you.  I never planned on having children and believed that the batteries in my biological clock were well and truly dead.  However, on Christmas Day 2006, after we drank our way through everything in the house including the duty free cupboard we got a bit carried away!

Late January, I knew in the back of my mind that I was pregnant (sore boobs, etc) so I went off to a chemists, one where no one would recognize me, and bought a pregnancy test.  I came home, peed all over my hand and to my great relief it was negative.  But, I knew it must be wrong, so off I went again to get another one and no big surprise this one was positive!

I was in utter shock and in my true fashion I wandered to the shop at the end of the road and bought 20 fags and 4 of the largest tins of beer I could get.  I then returned home smoked all the fags and drank all the beer and called my best friend in tears somewhere in the middle.  She managed to calm me down.

When hubby arrived home I had the fire going and made him sit down in front of it.  Then I presented him with a present…gift wrapped and all.  Inside were these: 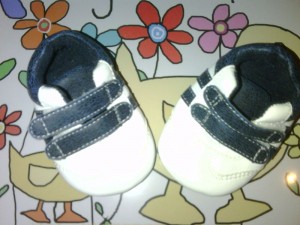 It took him a moment, but he was over the moon and then……I passed out!

So how did you tell your other half?

Please note:  I did give up all this silly business during my pregnancy!

Here is my contribution to @urbanvox’s most embarrassing moments meme.  It’s an old post so hopefully it’s okay.

After having my daughter, to say I was self conscious about my body would be an understatement.  So when I was invited to my best friend’s Hen Party in Spain, the thought of putting on a bathing suit filled me with dread.

I met up with my best friend prior to going and we were chatting about this.  She said that everyone would be wearing bikinis and there would be all shapes and sizes, from a size 6 to a 20.  After a few beers I decided ‘what the hell’ and headed to BHS to try on some bikinis.  I’ve never really been a bikini person.  I can assure you it didn’t look good but, I don’t know how, it did look better than my one piece Speedo style one.  It may have been the beer talking

Fast-forward; so, off to Spain we went and hit the beach.  Lying on the sun beds wasn’t a problem as long as I kept my arms strategically placed above my head.  But, after several pints I couldn’t put off a trip to the loo any longer.  So, I stood tall, shoulders back and held my stomach in with all my might and proceeded to walk the length of the bar past all my friends and other stag and hen parties.

I was convinced they were all staring at me…….

As I’d walked the entire length of the bar with my Tampon string hanging out of my bikini!  I might as well have been naked!

What’s your most embarrassing moment?