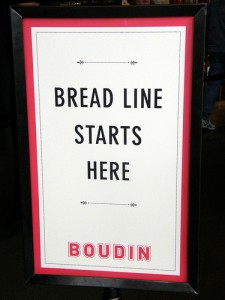 I used to love building dens as a kid.  According to my mum we used to spend hours doing it.  My sister and I would use every sheet in the house and any piece of furniture we could move.

After dinner tonight we set about building a den with Madame, using EZ Fort.  It was brilliant fun.  The only thing I would suggest is never build a fort with someone who has an engineering degree or you will get comments like this….

‘Doesn’t have a positive enough fixing’

‘If you want to build a box structure to make it stronger you always need diagonals, you know crane jibs…’

For goodness sake, we’re just building a Fort not the Eiffel Tower!

For the most part the construction kit was great, easy to assemble and we could construct it indoors, which is a must here in the UK.  However, if I was going to purchase one for myself I’d probably opt for the Toobeez Life Size Building Set, the next model up, as it looks sturdier.  We found once we constructed it and draped a few blankets over it, it collapsed.  Unfortunately, we didn’t have a light weight sheet big enough.

All in all, it was great fun.  I’m going to let you in on a little secret….this isn’t the first time I’ve built a den since my childhood.  Look what I built in a 5 star hotel a few years ago!  Weirdly room service didn’t bat an eye!  I’m just a big kid. 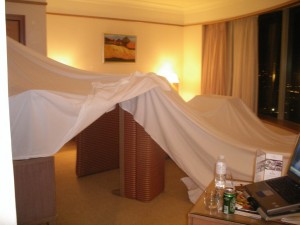 My car was broken into a few months back.  It took me a few minutes to work it out but when I jumped in I noticed that the glove box etc was all open and then it dawned on me.  The bastards had stolen my satellite navigation.  Please, no lectures about leaving it in the car.  We have a built in one that doesn’t work, so I’d thought they’d see that and not think that we had a portable one.  I think the ring on the windscreen was a dead give-away.

I contacted the police and insurance company and as usual it would cost me more on my insurance to replace it than to just by a new one.  They sent the CSI out to finger print the car and me, I was hoping for Nick Stokes but no luck.  Strangely there was no sign of a break in and I was convinced that I’d locked it.  However, as a busy mum I started to doubt myself and hubby definitely didn’t believe me either.

The police officer did say that nowadays criminals don’t need to break windows or jam locks as there are devices out there that allow them to get into cars without damaging them.  I thought he was just trying to make me feel better.  Until I read this: 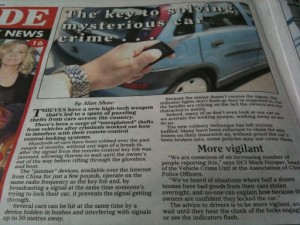 I find the thought of someone lurking and using a device to jam the fob quite unnerving and if I’m honest with myself it is very unlikely that this is what happened.  My only advice is to make sure you here the CLUNK before you walk away from your car!