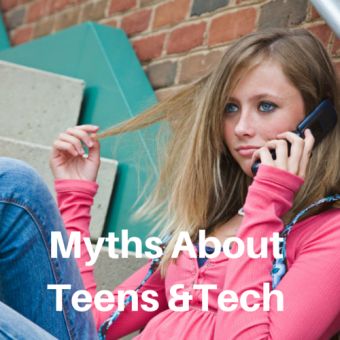 Myths About Teenagers and Tech that Parents should ignore 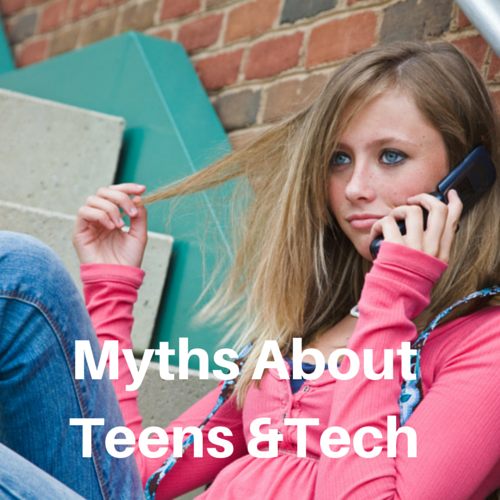 On the weekend I read an article by Elizabeth Pearle, the Senior Editor of HuffPost  Teen called 5 Myths that Parents should ignore about Teens and Technology.  She challenges the myths that technology is making our kids thick, anti-social and causing them to have attention spans of goldfish but in fact, technology is making them more engaged, better readers and writers and more sociable than ever.

It is one of those articles, that you think, yes, she nailed it and I couldn’t have written it better. Well she is a professional writer, so it’s not surprising. The content was spot on and I found myself nodding the whole way through and was compelled to share it.

I strongly recommend you read it before you read the rest of this post.

However, there are a few things that I would like to add from my own personal experience as a parent, educational technology consultant and social media addict.

In the summer, I had the opportunity to spend more time with my 15 year old niece. I’ve been away for most of her life so haven’t got to know her as well as I’ve had liked. She does spend a lot of time on her phone, like most teens and when I say a lot, she is on it constantly even into the wee hours of the night. It winds the majority of adults around her crazy.

However, it doesn’t bother me as a high user of tech myself, I’m fully aware that she can talk to her friends and join in a conversation with me at the same time. So, instead of chastising her, I showed interest in what she was chatting about and in the end she opened up and started sharing with me.

‘Text speak is not making them stupid’

I couldn’t even hazard guess at the number of messages teens send in a day. But I know that I’ve personally sent over a 160,000 tweets which probably equates to a rather large manuscript, more than I ever wrote at school. Kids are reading and writing messages relentlessly, this can’t be a bad thing, even if they throw in creative ‘text’ spellings, they’re engaged with language. Isn’t this what we want?

‘It’s causing them to become anti-social’

Even though I spend a lot of time on Social Media sites, I’m one of the least sociable people you will meet. I hate chatting on the phone or making small talk with people when I first meet them. However, with the advent of social media, I find that I’m more sociable than ever. I seek out conversations on Twitter and Facebook, join in and often start my own conversations.

I asked my niece about this tonight and she said ‘they really do care’  This may be one of the reasons that the younger generation are no longer using Facebook as they don’t want everyone, including their Nan, knowing what they are up to and migrating to Snapchat.  Teens have been private since as long as I can remember and I was too.  Getting anything out of them is more difficult than pulling teeth.

Prior to coming to the UK and applying for jobs, I told her to clean up her Facebook page.  She had an interview and the person said ‘you do realise your Facebook page is wide open’  she said ‘yes, I have nothing to hide’ which he replied, ‘yes I could see that’. So lets give them a bit more credit and space to be teens.

As I’ve said before the internet is an amazing place to learn and children who don’t have access to it could be academically disadvantaged. There are safety issues we need to consider, but I do worry that all of the e-safety talks and information aimed at parents ends up only scaring the hell out of them resulting in them restricting their child’s access to this resources.

Head in the sand?

One of the most frustrating things for me is other parent’s unwillingness to understand technology a bit better so they can engage in meaningful conversations with their kids. I don’t know how many times I’ve heard parents say ‘I don’t do Twitter or Facebook’ I’m not suggesting they sign up to all the platforms and lose years of their life like I have. But I do encourage them to sign up for an account, log into their kids accounts or borrow a friends to have a little look around so they can talk to their children in an informed way and show interest.

I know all the kids are now using Snapchat, I’ve personally never used it, even though my generation are starting to have a play.  However, my 20 year old niece is with us at the moment and I made her sit down with me and show me how it works.

However, as a parent, with anything else are children get involved with we educate ourselves about it. If our child chooses to play rugby, we appreciate the dangers and get them a mouth guard. When they are old enough to get themselves to school we check out the route.  If they spend the night at their mates, we get to know the parents.

I’m not suggesting if your child is going to their first rave you drop a couple of Ecstasy tablets, put on some house music and dance around the lounge. However, you would educate your children on the dangers of illicit drugs? No?

So, why don’t many parents do the same when it comes to technology?

6 thoughts on “Technology is not making our kids stupid!”