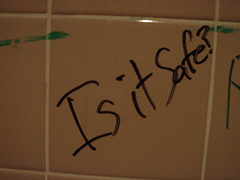 I work in education as an IT consultant so I’m all too aware of the importance of e-safety when it comes to kids and the internet. Personally, I’m at the adage that I’d rather teach them how to deal with uncomfortable content or experiences rather than closeting them to it. Basically, teaching them what to do ‘when’ it happens, as it’s only a matter of time.

In all the years, I’ve been on the net I’ve rarely come across inappropriate content but it can easily happen. I won’t mention the time I tried to go to the Mr Men website, put the full stop in the wrong place and ended up in a gay men’s website. I have to admit there were some pretty hot men and wasn’t that bothered that I couldn’t get out of it! ;-)

However, it made me think of my own internet use. Here are a set of typical rules for kids and how I’ve broken them…..repeatedly!

Never give out personal information like your telephone number or home address
I don’t know how many times I’ve given people my mobile number over twitter. I hate seeing people struggle with anything to do with social media (twitter, Facebook, blogs) and not offer to help. And on several other occasions, normally to do with a bereavement, I’ve given my home address so people could pass on cards etc…

Never, under any circumstance agree to meet with anyone you meet on the internet
I’ve lost count of how many tweet-ups I’ve been on. If you’re wondering what a tweet up is it’s when you meet up with other twitterers. I’ve even been away for the weekend with a few and had one for Christmas last year!

Never send pictures
Well you just have to see my ‘recent images’ on my twitter profile to see how many times I’ve done this, most recently a photo of me with a glass of wine and a crash helmet. Back in the summer I also received loads of tweets saying they saw a photo of my daughter in face paints at Lollibop, a children’s festival in London, she’s a star and doesn’t know it.

Don’t respond to mean or abusive messages
On more than one occasion I have fired back and ‘F’ Bomb at people or engaged in some quite heated debates, but it’s usually followed by hitting the block button!

Don’t share your passwords with anyone
I personally never share my own passwords with anyone, as I’m not that stupid, but I do have access to at least a half a dozen people’s blogs, twitter and Facebook accounts from when I’ve helped them out. I even have passwords for a few blue chip companies that I run twitter accounts for. I wonder if they’ve been changed recently. *runs off to check*.

This is tongue in cheek. However, the biggest difference here is that I’m an adult, not a child, and I have the reasoning abilities to work out the risk and would never put myself in unnecessary danger but a child might.

Nevertheless, as adults I think we really need to think about the messages we are sending out to our kids.

I would love to hear your thoughts on this.  Please do leave a comment.