Tonight I was telling hubby about the Flap Jack debacle, where they’ve been banned due to Health and Safety issues, some kid was hit in the head with one.  His immediate response was, as predicted, a rant about the nanny state, which I completely agree.

Then he moved on to talking about, as he does, when he went to school and the teachers used to throw board rubbers, you know the ones with the wood backing???  This triggered a personal memory.

When I was about 7 possibly 8.  I explicitly remember my teacher writing this on the board. 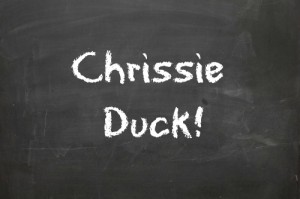 Being blonde, or possibly young,  it took a minute for the penny to drop, but when it did, I hit the deck.  Then he proceeded to chuck the board rubber at the kid behind me.  I honestly, don’t know if it hit the kid but I reckon it was probably deserved.

I would never condone such behaviour as it borders on abuse and would never mention the teachers name as he’s probably comfortably in retirement if he isn’t dead already, and he was my favourite teacher ever.

However, and I think this is the point to think about, I stopped, I listened and didn’t question or challenge authority.

I think there is something in this?  Thoughts?

One thought on “Chrissie Duck!”