The other day I was doing some laundry and I don’t know why, but when I glanced at our rather large basket of unmatched socks it made me think of twitter!

When I first started twitter I felt like a lonely sock on the clothes line, blowing in the wind, talking to myself. 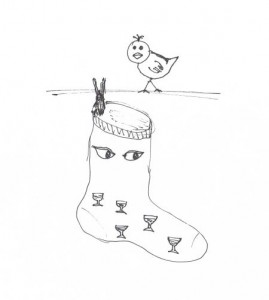 In time, I started to collect some other odd socks but sometimes I couldn’t see the connection. 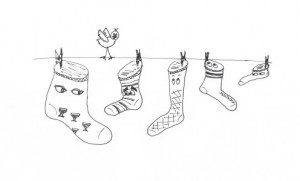 After awhile I started to make quite a few matches, with the odd sock still hanging around. 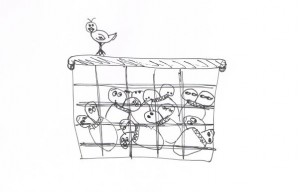 Along the way I’ve had to throw out a few socks as they had holes in them and some I’ll never find a match to, but I have kept quite a few odd socks as they make it more interesting. 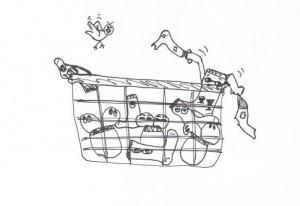 Thanks to the lovely Susan (@CocaBeenSlinky), a very good twitter mate who is always laughing, for the illustrations. They’re fab aren’t they? She doesn’t advertise herself as an artist, but I’m sure, if you’re like me and blog but can’t draw and struggle to find copyright free images, she may knock you some up for a small fee! I’m paying her in wine. 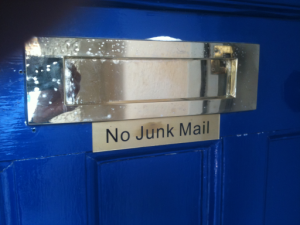 This is my front door.  For the most part it works fairly well in reducing the amount of junk mail that we receive.  However, I think we may need to get it translated into a few more languages!  :-o

Sometimes I wish I could hang one on my Twitter account.  The amount of crap I receive is unbelievable and I’m sure I’m not alone.

1) Ask me to vote for your nephew in a baby photo competition.  A) I don’t know you and B) the kid’s ugly.

2) Send me auto DMs saying thanks for the follow with a link.  I liken it to a quick hello over the bar, and then you throw your business card in my face and walk away.

3) If I’ve never spoken to you before, don’t ask me to support your charity.  I’m sure it’s a good cause but I don’t give money to panhandlers in the street either.

4) Send me unsolicited tweets promoting your products.  It’s up there with cold calling and the Jehovah’s banging on my door on a Saturday morning.  I will virtually slam the door in your face as well.

5) Blatantly ask me to follow you.  Why would I follow someone with no followers, no tweets and no avatar?

6) Ask me to RT something for you.  You’ve annoyed me by asking, so why would I then in turn annoy all my followers?

Have I missed any?

Thanking you in advance, 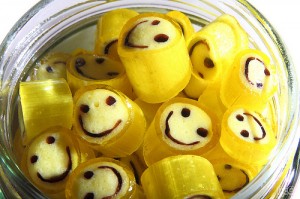 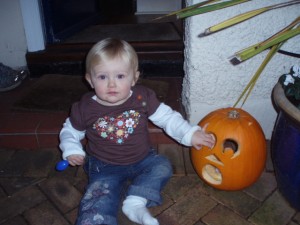 I don’t know if it’s the Canadian in me but I love Halloween and sometimes I wish it would take off a bit more here in the UK, but understand why it hasn’t.  I grew up with it as a kid and I don’t read anymore into it than kids getting dressed up, scaring the hell out of each other, blagging loads of sweets off the neighbours, maybe throwing the odd rotten egg and soaping a few cars.  So, to get into the Halloween spirit I’m hosting a Pumpkin Carving Competition.

Unfortunately, the only thing I’m able to offer in the way of a prize is to feature the winning entry on my blog with a mini bio!  Hey, you may get a couple of new followers and of course you’ll secure ‘bragging rights’!

The rules are simple

How to submit your photo.

Please drop me a line if you have any questions.

Good luck and get carving!

Please note: I will not be held responsible for any injuries incurred during this competition.  So, if you cut anything off don’t come crying to me!