I was absolutely thrilled last week to read that Saudi is going to give woman the right to vote and run in elections.  A few years back I worked in Riyadh, Saudi on behalf of the British Council and apparently I was only the second woman ever allowed into the Ministry of Education.

I met some amazing woman during my time, some of the most highly educated woman I’ve ever met and I’m still friends with a few of them to this day, speaking regularly via Facebook.  I was openly welcomed into their secret world, even attending a wedding and privy to a very sober hen-do.  However, they went out of their way to try to convince us they were happy, not being oppressed and that the Western World had it all wrong. Nevertheless, I couldn’t shake the niggling feeling this wasn’t the case, as Shakespeare said ‘lady doth protest too much’.

When I travel I have a policy of keeping my ‘eyes open and my mouth shut’, which you may find hard to believe. I disagreed with a lot that I saw from beneath my Abaya; the school was highly segregated, if we had technical issues they couldn’t be dealt with while we were in the building as the technicians were male.  We travelled in separate cars to our male counterparts and they had tinted windows, when we didn’t (this was during the time people were taking pot shots at foreigners at intersections and 3 days before Ken Bigley was beheaded). When we were invited into people’s houses for dinner we were allowed to eat with the men, uncovered, while our new female friends ate with the hired help.

Last night at book club we had a discussion about this, not a heated one, but a few were absolutely disgusted that this was still going on in this day and age.  I had to remind them that not that long ago (within a 100 years) it wasn’t that different here.  I’m not sure how it will work logistically as woman are unable to drive and they’ll have to be escorted by male family members but I strongly believe that this is a step in the right direction.

What do you think?  Is it a step in the right direction?  Is it an empty promise? 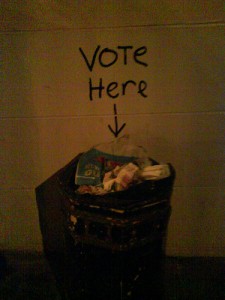 I normally don’t have a political bone in my body, embarrassingly I’ve never voted in all my 38 years, but this election has peeked my interest.  As most of you know I can’t vote.  For years, I thought I was unable to vote because I’m a foreigner, but recently thanks to one of my followers, I found out I can, being part of the Commonwealth but unfortunately it was too late to register.

I think my original thought stems from the last time I wandered into a polling station and asked and they said no….in reflection it may have something to do with the fact I was drunk and didn’t have a polling card ;-).

I know there are many fan dangled official polls but I’m genuinely interested to know who my friends will be voting for.  I know this is a very private matter for most so this vote is completely anonymous.

If you’re still stumped on who to vote for I also found this quiz.