My hubby was given a hand me down iphone3, which we were very grateful to receive. However, as usual I was left to sort it out. Bless him, he can barely send emails with attachments.

Long story short after nearly bricking it, we had to have it unlocked and I was told under no circumstance should I update it and guess what I did? Anyhow, I managed to get it sorted. But, what I found interesting was the content of the phone prior.

My mate, who gave us the phone, is a food technologist. The phone was full of food type apps; Waitrose, nutrition calculators, shopping lists etc. It made me wonder what our phones/ipads say about us.

phones says about them!  Plus, it’s a great way to share good apps.

According to my phone I’m a social media addict! For Christsake, I have a separate folder for it with 3 twitter apps! 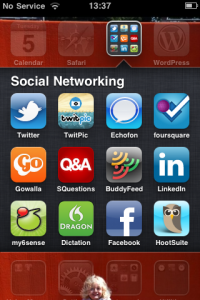 I’m a mum! Phone has been a godsend, especially when you want one more sneaky drink in the pub. 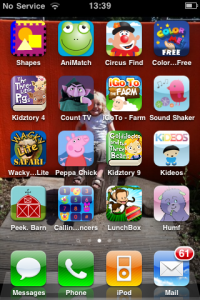 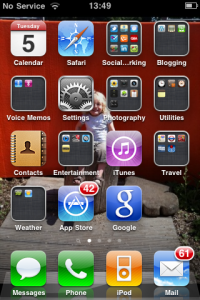 Even if I haven’t tagged you do join in!  If you’ve never done a meme before, basically you write a post similar to this, link back here and then tag a few friends.

9 thoughts on “What does your iphone say about you?”