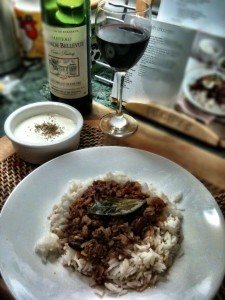 I was given a bit of a challenge for tonight.  Thanks to the folks at Booths, I have been put up against Sally Whittle in a cooking competition to see who can produce the nicest meal that incorporates some of Saint Emillion Grand Cru Red Wine.  If you know us both you can see the funny side of this, we are great mums but not known for our domestic abilities.

At first this seemed like a very unfair challenge as I do a bit of slow cooking and I was under the impression that Sally couldn’t cook, but it now looks as though she can, but doesn’t purely down to being ridiculously busy.  She’s taken up the challenge with gusto, there are not many people in this world more competitive than I am but she is……according to her she is an AWESOME cook.  She’s also incredibly modest.

I’m not sure how to break this to her, but I didn’t find time to cook myself today and I have issues with sharing my wine with food.  But I’ve thoroughly enjoyed watching at her rolling up her sleeves and getting stuck in with zeal and I must admit I’ve been egging her on knowing I hadn’t cooked myself.  Yes, I am evil.  I was at work today so hubby did the cooking but it was one of my recipes, I literally laid everything out for him, including all the spices but I promise to enjoy a glass of red with it.

Does this mean I have to forfeit?

I have to admit when my mate Kevin first sent this recipe to me I was a bit scared. As you can see it has at least 12 different spices. I don’t mind a bit of zing in my food but a bit of a wuss if it’s flaming hot. I’m pleased to announce it isn’t. It’s hard to describe but it has a slow gradual heat, is gorgeous and worth the effort.

As usual I went off-piste and modified it for the slow cooker. I browned the mince with the onion then put everything in the slow cooker for 6-8 hours on low. 30 minutes before the end I added the sour cream. The only other thing I would change is the amount of salt. It calls for quite a bit and I think you could get away with a lot less.

The Story behind the chilli

A friend shared this recipe with me.

The story goes like this. In the 1980’s he lived in the US, in Detroit. In
Detroit there was a Mexican place that was renowned for their chilli. His
Parents used to go there all the time to eat with their friends. When they left,
they paid the chef for the recipe because they couldn’t live in a world without its magnificent taste.

They were kind enough to pass the recipe on to him and in the last 10 or so
years I’ve worked tirelessly to refine and improve its delicate flavours.

I would add up front that if you like chilli it is very much worth the time and
effort to cook this. If you don’t like chilli, well it’s still worth it because of
how good it is.

Don’t let the name put you off either, while it is not for the faint hearted, it
can also be made milder if required. 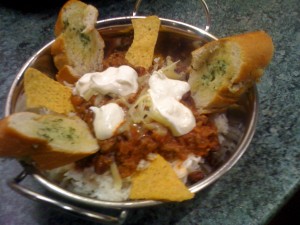 1. get the meat, brown it then drain it of all fat. Put it to one side.

3. add the browned meat to the pan and mix with browned onion

4. add 2 tins of plum tomato. Stir them around into the meat and onion.
Break them up a bit with the stirrer.

5. add the delicious blend of herb and spices, garlic and bay leaves. Stir

6. wash and drain the kidney beans and stir them in.

7. Cover and simmer. Now I put it on the lowest heat possible and leave it
for 2 hours min. Stir every 20 mins or so. Basically the longer the better.

Now this is quite hot dish, so I get sour cream and after a few hours of
Simmering I stir in a few table spoons. This thickens it up nicely and makes
it bearable for the weak.

I then serve it with grated cheese on top and some jalapeno peppers on
either rice, baked potato or on its own with some crusty bread.

Thanks again Kevin for yet another delicious recipe. I still need to try the Fish Curry.

Click here for more of our favourite slow cooker recipes.

Thanks to Martin (@martindale52) for sharing his most recent Chilli recipe.  He’s been using a slow cooker for years and is much more confident than me and loves to wing it.  If you like a bit of heat this ones for you!

Yesterday I decided a chilli would be a good idea, this what I did. Into the slow cooker I put:

When I first received the recipe I was a bit worried.  I like my food with a bit of kick but this looked very hot.  I wish I hadn’t but I opted for mild chilli powder and medium Peri Peri sauce.  In future, I would follow the recipe to a ‘T’ and go for a bit of fire.

I also added 25g of dark chocolate when I added the kidney beans, recommended by Martin, but makes it smooth.

The only other thing I may do the next time I cook it is I may sauté the onions first and brown the mince and possibly use a bit less liquid as I like my chilli thick.

Other than that it was lovely!  As you can see by the picture we served it with tortilla chips, a dollop of sour cream and topped with a few chilli peppers.

Thanks Martin for another recipe to add to my stash! 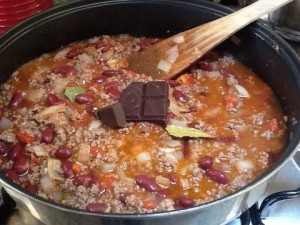 I made the most amazing Chilli earlier this week, if I do say so myself.  I’d love to post the recipe but I can’t as I lifted it straight out Sarah Lewis’ 200 More Slow Cooker recipes.  However, I think I’ve cracked her secret…Dark Chocolate and Dark Muscovado Sugar.

I know it sounds insane adding chocolate to chilli, you can’t taste it but it gives it a smooth velvety texture.  I reckon you could add 25g of dark chocolate and 2 TBSP of Muscovado sugar to any chilli recipe.

We served ours on a bed of Basmati Rice with a huge dollop of sour cream.  When I do it again, I’m going to serve it with some Tortilla Chips.