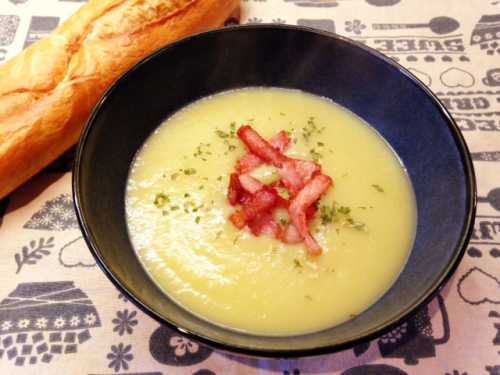 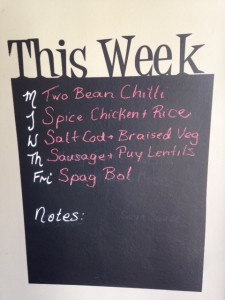 I’m stuck in this limbo between Winter and Spring.  I know it’s supposed to be Spring but I kept finding myself still choosing winter comfort food when planning my meals this week; Two Bean Chilli, Sausage and Puy Lentils and Spaghetti Bolognaise.

I’ve never made the Salt Cod before and in truth I’m using up a selection of white fish from the freezer so it may not actually be cod.

I’m reviewing the spices, hence the Spicy Chicken and Rice recipe, but I’m not convinced about Chicken and Cinnamon and not sure how it will work.

I’m out at my networking group, An Afternoon in the Pub on Friday, so I will pop Spag Bol in the Slow Cooker for Hubby and Madame as it’s their favourite.

As always, these are all Slow Cooker Recipes and if I have any joy, you will find them on my other blog, slowcookerqueen.com.

Have a great week. 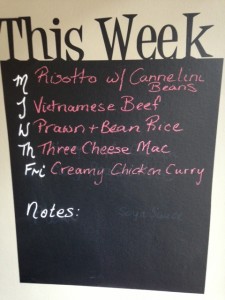 My daughter has now been off school for 18 days!  18 WHOLE DAYS!  I’m gagging for her to get back to school tomorrow and a semblance of a routine restored.  Her school had an inset today (just what we needed after two weeks off),  but  she was still supposed to go to child-care but threw a wobbly and as I was home, I decided to spare the childminder the pain and keep her home with me.

However, I did explain I had work to do and I’ve already planned the meals for the week so she’s going to have to eat Cannellini Risotto.  It’s not going to happen is it???  And for the record, I’ve got very little done.

Anyhow, all of the recipes this week are new so I don’t have any links to the recipes but if they turn out okay, you will eventually find them on The Slow Cooker Queen.

Have a great week and I hope you enjoyed a bit of sunshine.

I like to plan my weekly meals as it saves me time, money and stress. 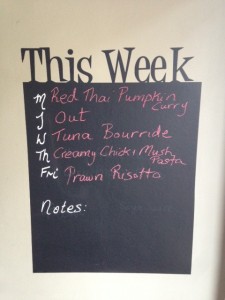 It’s a rather ‘normal’ week around here and the majority of meals will be slow cooked.  I have to do an airport run tonight but forgot hubby is in London so I have to bundle the little one up and take her with me.  Hopefully, our Thai Curry isn’t overcooked and turned to mush when we get home.

I’m out Tuesday night in London for an SEO event, however, I’m not feeling that enamoured as I overdid it a bit last night and I will need to sort out some childcare so we will see.

We’re trying to eat a bit more fish so you will see that we are having it on Wednesday and on Friday.  Fingers crossed Madame likes the Risotto, but I do know she loves prawns.

Have a great week everyone.

Since we’ve started using our Slow Cooker regularly we find that we are having way less Take Aways than we used to. Back in the day, by the time I got home from work, collected my daughter from childcare, bathed her and got her into bed.  It was getting late and I couldn’t be bothered starting to cook, so we’d find ourselves whipping around the corner to McDonald’s or ordering in.

Last week I was inspired by Cabinet Stew to have a go at making Chinese Food in the Slow Cooker.  It was a lovely change to the MSG filled ones that we were getting delivered and no more waking up in the middle of the night dying of thirst. 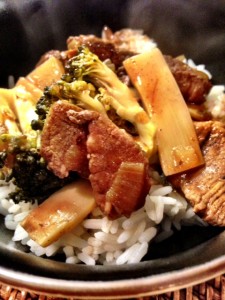 Print
Prep time
10 mins
Cook time
6 hours
Total time
6 hours 10 mins
Author: Mediocre Mum
Recipe type: Slow Cooker
Cuisine: Chinese
Serves: 4
Ingredients
Instructions
3.2.1682
Don’t forget Slow Cooker Sunday is all about sharing recipes and being inspired.  Please add your favourite recipes by using the Linky below.  They can be old or new and don’t have to be your own.  As long as you have a web address they can be added. Alternatively, you can always add them in the comments section.
For more recipe inspiration check out our Pinterest Board, with over a hundred slow cooker recipes or join our Google + Community ‘All Things Slow Cooking’

And if you subscribe to my blog, using the form in the sidebar you can get a free copy of my first ever eBook ‘There’s More to Slow Cooking than Stews – 10 Recipes to get you going’.

Disclosure:  The meat was Courtesy of www.farmison.com;  a one stop gourmet shop selling food and produce sourced from over 75 of the UK’s leading farms and producers. All the best quality, most popular and rarest cuts of award-winning meats, cheeses and greengrocer goods are all selected for their superior taste can all be delivered directly to the door of the home cook.