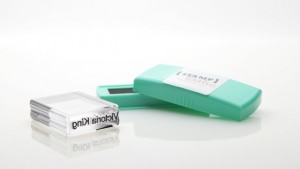 My daughter only started school in Sept and I’m already starting to get hacked off with the number of items of clothing we’ve already lost. I won’t mention the jacket she only wore once and coincidentally another child has the same one but the mum was adamant it wasn’t hers.

A few people mentioned Sharpies, as a foreigner I had no idea what it was and had to Google it. Surprisingly, I did have one, but I have to say that this personalised hand-made stamp (£16.95) from Stamptastic is a godsend. It works on fabric, metal, wood & plastic and doesn’t wash off! I’ve been busy stamping all of her belongings.

For the record her name is not Victoria King!

Disclosure: the stamp was complimentary