Even though we love to moan about the weather in the UK we have to admit that we’ve had a pretty good summer so far.

When we had the mini heat wave a few weeks ago, it was challenging trying to think of things to keep my daughter cool during the first part of the school holidays.  You couldn’t pay me enough to go to the local Splash Park as it’s always heaving and I’d end up having an altercation with another parent!  We’re lucky as we have access to the local Dive Club Swimming pool.

But what about ice-skating or sledging?

Bet you didn’t think of that.

Two weeks ago we were invited to the SnoZone in Milton Keyes which is an indoor ski slope,  which always intrigues me being Canadian.  The Snozone is less than an hour from St Albans.  This is the first time that the SnoZone is offering  Summer Fun Activities, to keep kids active and entertained.   There is a great balance of on and off the slopes activities (e.g wacky races, dodgeball, sledging, ultimate Frisbee, dance classes, junk music, arts & crafts)  for kids aged 5+.

As you can see our daughter had a great time and so did her pal. 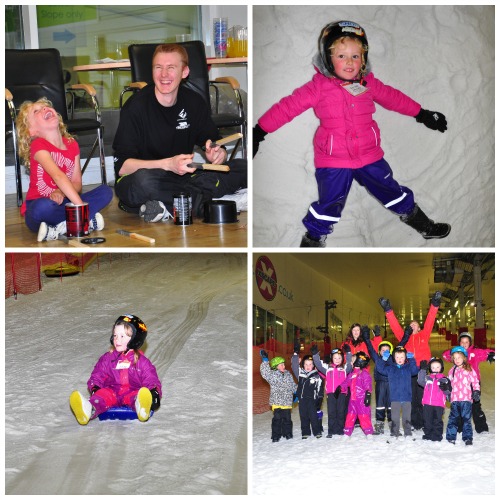 Children can do either a half day (£24.99) or full day (£34.99) which includes snacks and refreshments.  Parents can drop kids off, sit in the cafe and watch or possibly hit the slopes themselves.  All you’ll need is some warm clothing and water proof gloves.

How to survive summer holidays

Not suggesting we do, but I haven’t laughed so hard in ages.  We both work from home and it does get fractious at times.  Being school holidays, I’ve done as predicted and chucked money at it, not because I have a surplus of cash but with an only-child and a tiny garden, I’m always looking for things to entertain my five year old during the school holidays.

I don’t want to give the impression that it’s expensive.  It cost me £20 and worth every penny.

Growing up I never played Swing Ball, I have no idea of its origins but guessing it didn’t make it across the Atlantic, but I could be wrong.  We played a similar game called Tetherball but it didn’t have paddles, players used their hands and it was a hard plastic ball, more football sized.

After a few goes with our daughter, we decided to play each other…. is it just me or does it look like he’s trying to kill me?

So, if you’re looking for something to save your marriage or to have a right laugh with your kids this summer in limited space then this is the answer.  Great family fun!

Hubby reckons we should try it after a few beers.  Can someone warn A & E?

I bought mine from Cuthberts Toys.

‘Are you completely insane?’ I replied.

Okay, I’m looking forward to lying in, not having to do the school run, making packed lunches, spending more time together and a family holiday but the sheer thought of entertaining my daughter for 6 WHOLE weeks completely freaks me out.  This may have something to do with her being an only child as we don’t have any built in play mates and our cats can only take so much.

Sally Whittle, from Who’s the Mummy, wrote a post a week or so ago, talking about not ‘selling boredom as a virtue‘, it’s worth a read.  I do agree with her to some degree.  But I find it challenging, at times I need my daughter to be able to entertain herself and as an only child I find myself organising too many things for her and then when we have nothing planned, all I get is ‘I’m bored’ ‘what are we doing today’.  She seems to have lost the ability to do this herself and I’m partly to blame.

So, I need to find a balance between organising some things together but also encouraging her to amuse herself a bit more. 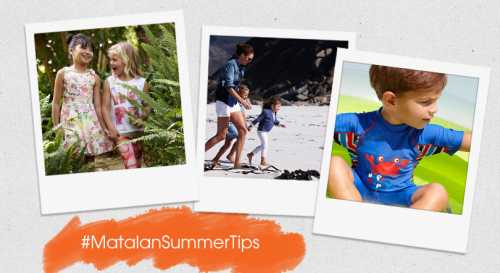 This is why I’m looking forward to the #matalansummertips Twitter Party this Thursday the 18th July from 1-2pm, where we will all get together to share our tips for surviving the summer.  Join in the chat for and be in with the chance to win 1 of 10 £20 vouchers!

My top tip ‘get a loads of wine in and I mean loads of it”! 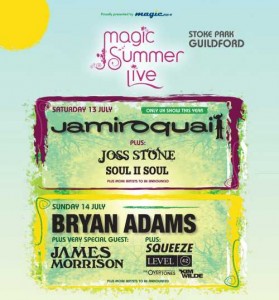 Bryan Adams…….wow, that takes me back to the 80s, in Canada, when he shot to fame with ‘Straight from the Heart’.  I honestly had no idea he was still touring.  However, he’s headlining Magic Summer Live (13th/14th July 2013), a two-day family festival in the Heart of Surrey at Stoke Park in Guildford, alongside the likes of Jamiroquai, James Morrison and Joss Stone.  A full line up can be found here.

Fancy winning a two-day family ticket (2 Adults, 2 Children) to the event?  Enter by simply using the rafflecopter form below.  Full Terms and Conditions are at the bottom of the form.

I have mixed feelings about seeing him, will it make me feel young again or even older?

Apparently summer is on the way and the UK is about to be hit by a mini heat wave with temperatures reaching 30 degrees on Thursday.  Most of us tend to use out slow cookers more in the winter than in the summer.  However, this is the perfect time to use your slow cooker as it won’t heat up your house like the oven will and you can spend more time in the garden drinking Pimms! 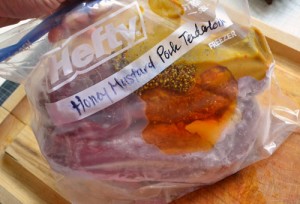 A friend of mine, who knows I have a thing for my slow cooker, sent me the following link, DIY Frozen Meal Packs for your Slow Cooker.  I think it’s a fabulous idea.  You can bung all of the ingredients for your slow cooker recipes into a Ziploc bag and then put them in the freezer so when you need a meal, just grab a bag from the freezer and bung it into the slow cooker!  How easy is that!  There are also some great ‘Summer’ Slow Cooker recipe ideas on there.  I now just need to work out where I can put a chest freezer.

I could really use some summer recipe inspiration.  Do you have any recipes I should try?  Feel free to link up your own recipes or ones you found online.  Alternatively, you can always leave your recipe in the comments section.

Thanking you in advance.